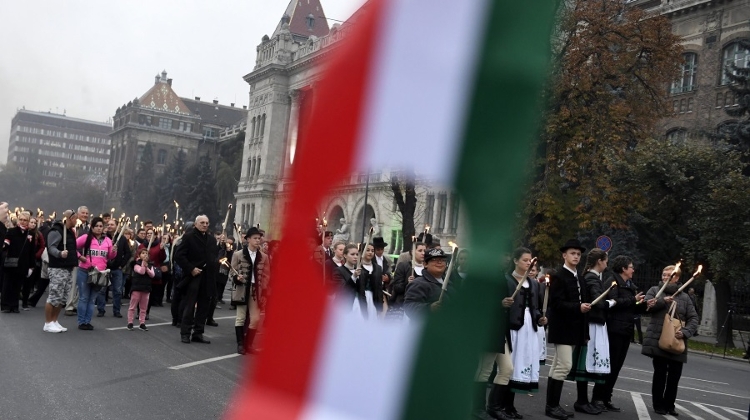 On 23 October 1956, the revolt against Soviet occupation and Communist repression began as a demonstration of university students in Budapest.

After the student demonstrations, hundreds of thousands outside the House of Parliament listened to Imre Nagy’s speech in which he promised reforms.

The bloody volley shot into the unarmed crowd at the building of the Hungarian Radio resulted in the growth of an armed uprising by the evening.

The protesters tore down the Stalin Monument – the symbol of Communist dictatorship – on Dózsa György Road, and occupied the building of the Hungarian Radio by dawn.

2.40 p.m.
Ceremonial procession to the commemoration event at the Budapest University of Technology and Economics

10.00 a.m. – 5.00 p.m.
Viewing of the Holy Crown in the Parliament Building
Members of the public may view the Grand Staircase, the Cupola Hall and the Holy Crown

3.00 p.m.
Speech by Prime Minister Viktor Orbán in front of the House of Terror Museum

8.00 p.m.
“Freedom Concert 1956” in Hall B of Millenáris
Featuring the Hungarian Radio Symphony Orchestra and Anna and the Barbies

Lighting of candles at the Wall of Heroes, the House of Terror Museum on 23 October

From 22 October to 4 November, at tram stops and some iconic venues of the Revolution and Freedom Fight located along tram lines 4-6 and 47-49, young people acting as news vendors and dressed in period clothing will distribute newspapers featuring archive news items.

From 22 October to 4 November, campaign and interactive exhibition on trams 4-6 and 47-49