All Expats In Hungary Can Now Get Covid Inoculation 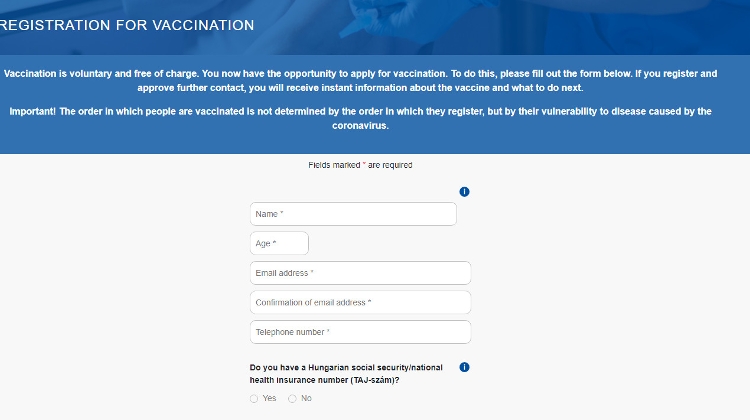 Foreigners living in Hungary who have no health insurance (TÁJ) number can now register for inoculation from Tuesday, 4 May, Hungary's chief medical officer Cecília Müller confirmed this week.

“They live here with us, and from an epidemiological point of view they are assessed the same way as Hungarians,” she said. “The time has come, we have ample vaccines. So, foreigners living in Hungary can also register and be inoculated.”

Registration for expats in Hungary can be made via www.vakcinainfo.gov.hu, free of charge. The order in which people are vaccinated is determined by their vulnerability to disease regarding coronavirus, not by the order in which they register.

At the onine site registrants need to input their name, age, email address and phone number, and indicate if they have a TAJ Card or not.

"If you register and approve further contact," the website states, "you will receive instant information about the vaccine and what to do next".

The actual vaccination of foreign residents in Hungary will start in the second half of May, with Hungarian nationals living in other countries to follow, the government’s Covid information centre stated this week.

Nobody should neglect to have their second inoculation

More generally, CMO Müller warned that the epidemic is not over, as the coronavirus continues to be amongst us.

She emphasised that nobody should neglect to have their second inoculation, as the manufacturers of vaccines can only that way guarantee protection.

National Police spokesman Kristóf Gál said that, despite the partial reopening, gathering in groups continues to be banned and everybody must continue to observe the defence measures.

Police took action against 1,966 people on the weekend for not wearing face masks and against 668 people for violating the curfew.

He said anybody who forges an immunity certificate is guilty of a criminal act and punishable by up to five years in prison.

Meanwhile, Pfizer-BioNTech has applied to the European Medicines Agency for its vaccine to be accredited for 12-15 year olds, Cecília Müller told a press conference of the operative board responsible for handling the epidemic.

As soon as the procedure is completed, Hungary will also expand the scope of the eligible demographics, she said. Foreigners without social security numbers will also be able to register for the vaccine from Tuesday, Müller said.

Nearly 340,000 doses of Pfizer’s vaccine are due to arrive in Hungary on Tuesday, Müller said, adding that they will be used to reschedule the second jab for teachers supervising the school-leaving exams in high schools, which started on Monday morning.

The one-dose Janssen vaccines will be used on vaccination buses bound for remote localities, she said.

Those wishing to receive their second AstraZeneca jab earlier than the originally designated three-month deadline can request it where they received the first dose, she said.

Thanks to the protection efforts and vaccination, Hungarian pandemic numbers are improving steadily, Müller said.

Meanwhile, the trace amounts of the virus in waste water, an indicator of the pandemic’s course over the next period, has slightly grown in the cities of Budapest, Debrecen and Szolnok and edged down in Eger, Pécs, Székesfehérvár, Tatabánya and other cities, she said.

"Hungary saved many lives thanks to Eastern vaccines"

Hungary saved many lives and “gained a month and a half” in vaccinations thanks to the Russian and Chinese Covid-19 jabs, a foreign ministry official also said this week.

Tamás Menczer, the state secretary for communications and international representation, said in a Facebook video that without the Eastern vaccines, the number of vaccinated Hungarians would not have reached four million by last Friday, only in mid-June.

Restrictions would have remained in force for a month and a half longer and the gradual relaunch of the economy, including the reopening of pubs and restaurants, cinemas, theatres and gyms, would have been delayed accordingly, he added.

“Had we listened to the anti-vaxxer voices on the left, there would be much fewer vaccinated, protected people and we would have lost a month and a half,” he added. Menczer said vaccines save lives and “lead us back to our normal lives”.

Menczer called on everyone not to believe the anti-vaxxers.

Special Report: Covid Immunity Card - Who Is Eligible & How To Get It In Hungary