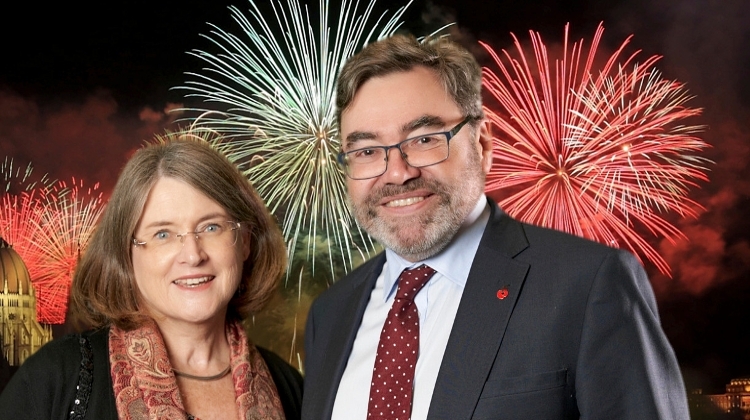 The atmosphere was warm and friendly all evening, with many smiles on the faces of guests from all around the globe, as the event photos show. Accordingly there were a multitude of introductions, reunions, and handy contacts made - both business and social. 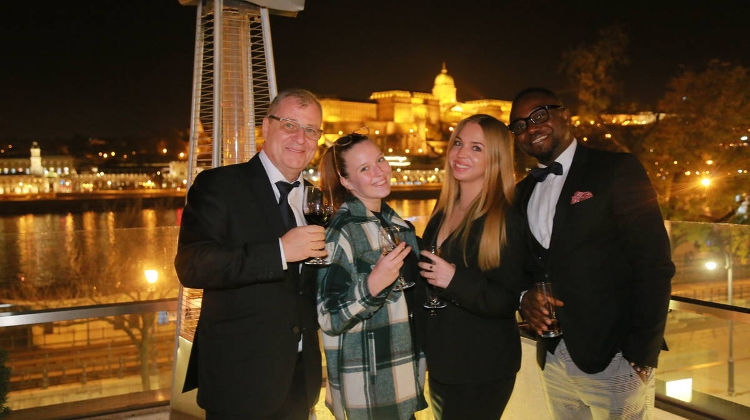 Held on Tuesday 9 November in the Grand Ballroom of the Budapest Marriott Hotel, with spectacular views of the Danube and Buda Castle, attendees included a great mix from Hungary’s business, cultural and diplomatic circles. 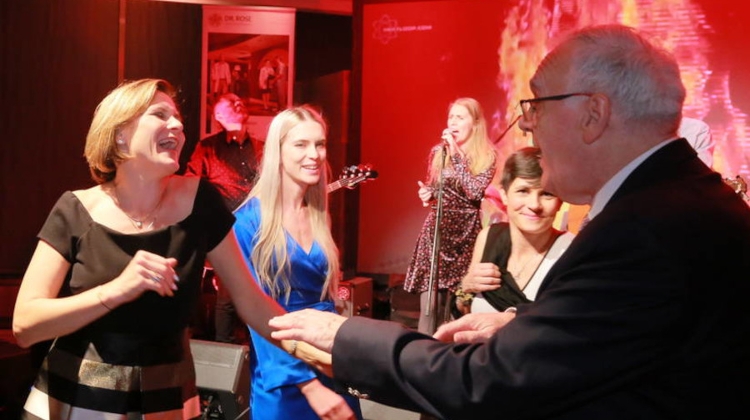 The ballroom glowed thanks to a virtual bonfire officially set alight by Her Majesty's Ambassador Paul Fox, and during the evening there was a traditional fireworks display projected on a big screen by Special Effects International - who also provided audio equipment for the expat band.

Ambassador Fox (pictured at top with his wife) wrote a note the next day saying, “Thank you XpatLoop for organising last night’s excellent event. Vicki and I really enjoyed it and met lots of lovely people, importantly it raised an impressive amount for local causes.” 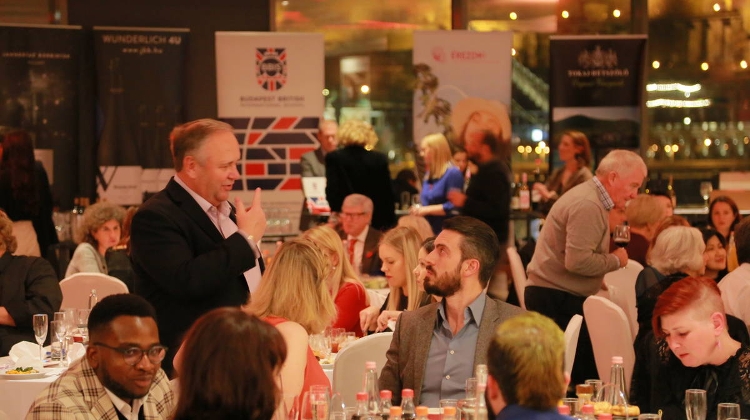 The 5* Marriott's expat GM, Arne Klehn, said, “It has always been a great honor for us to sponsor such a prestigious event as XpatLoop’s Bonfire Night Charity Party.

"This was the fifth occasion in the past years when the Budapest Marriott Hotel provided the venue and sponsored the event with various raffle prizes. The whole evening was full of surprises, emotions and the return was simply amazing. Looking forward to the next year’s success and cooperation,” Arne added. 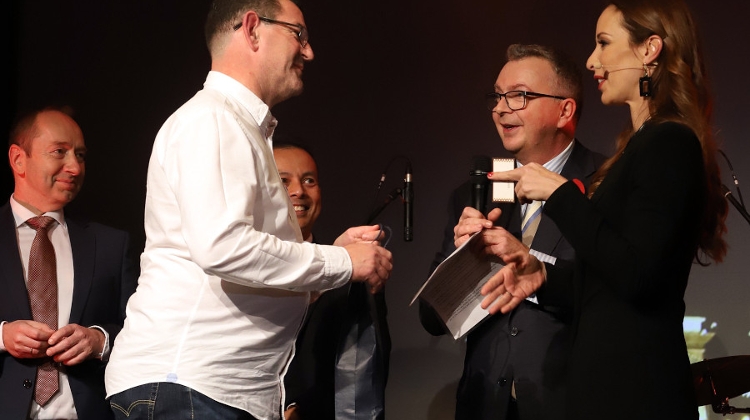 Guests all seemed to have a blast, such as regular event attendee Neil McGarry (pictured in white above), who said, “Everything was top quality; the venue, the food, the drinks, the musicians and the presenters. What a great event!"

Neil, the Principal at Britannica International School, continued, "Such a fantastic evening, raising lots of money for children who really need our support. I really enjoyed making some new connections as well as catching up with old friends.” 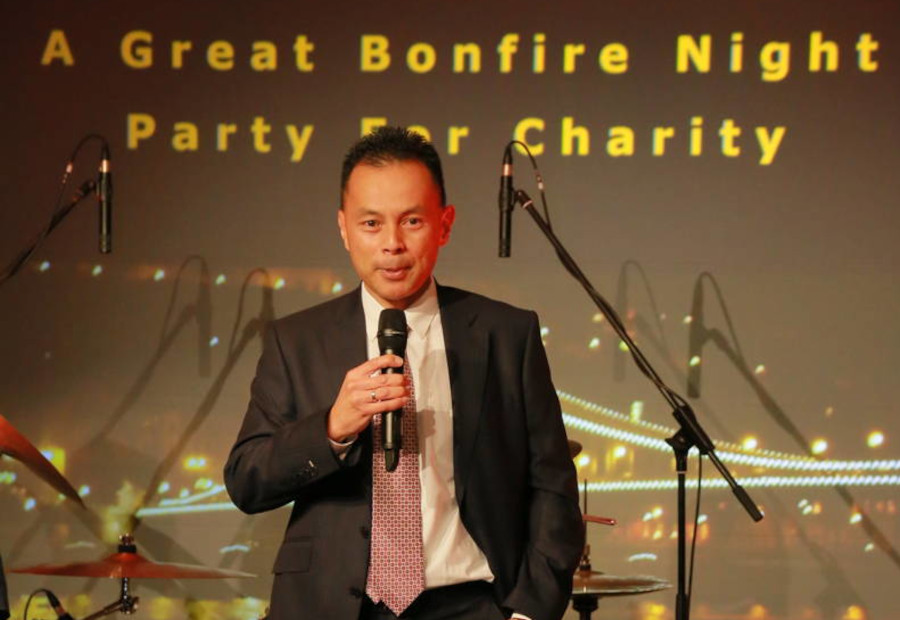 Feedback from event main sponsors was also very positive, and on the night FirstMed - based in central Buda - and Dr. Rose Private Hospital - based in the heart of Pest - announced a new partnership.

Both CEO's of these premium health care providers spoke on stage and made a special business card draw for valuable prizes which kicked-off the event in fine style.

"As always, I thoroughly enjoyed XpatLoop's Bonfire Night Party for Charity. This event never disappoints, bringing together a diverse group of good people to have fun and raise money to help local children in need," said Dennis A. Diokno, (pictured above) CEO of FirstMed, a decade long sponsor of this event. 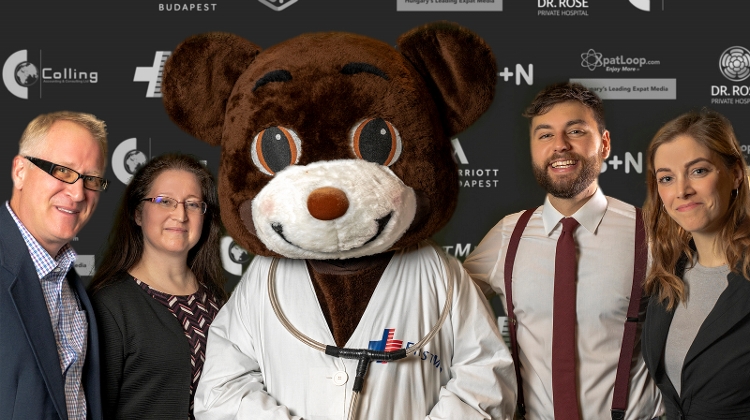 Dr. Kornél Papik (pictured below), CEO of Dr. Rose Private Hospital, added a extra boost to proceedings, "We are very proud of supporting this amazing event to raise money for children in need. Excellent venue, good atmosphere, professional organisation, everything needed to build relationships and enjoy the evening." 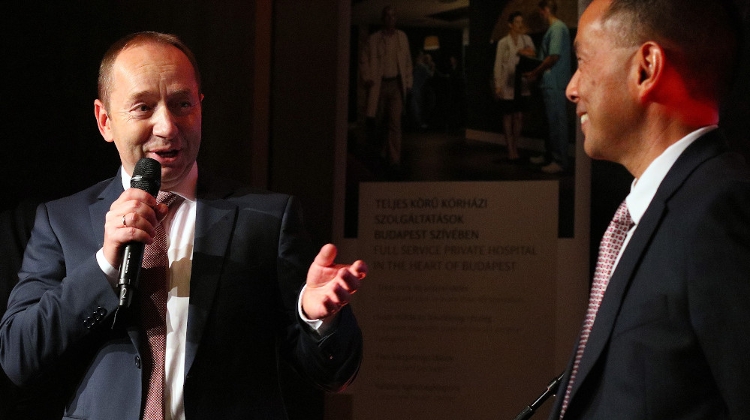 The event’s much appreciated Gold Sponsor this year was B + N Referencia. Supporting sponsor Samsung set-up a special mobile phone and photo installation which proved popular with guests who received a fun photo on the spot. 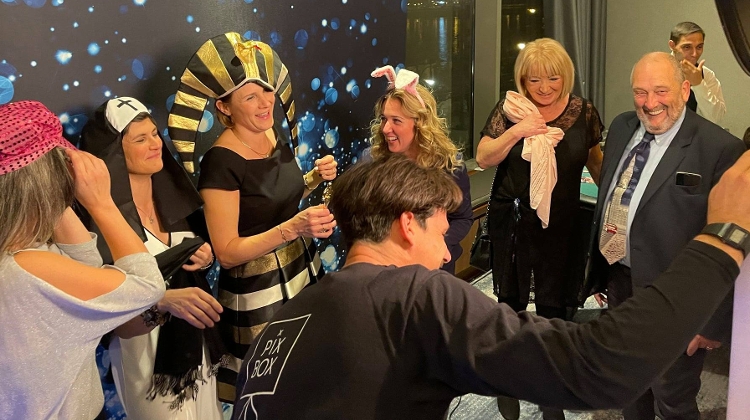 After a meet-and-greet session in the welcome room, fuelled by sparkling wine thanks to Bortársaság and fab food bites furnished by Good Karma, the doors of the ballroom were flung open revealing a sumptuous selection of dinner delights. 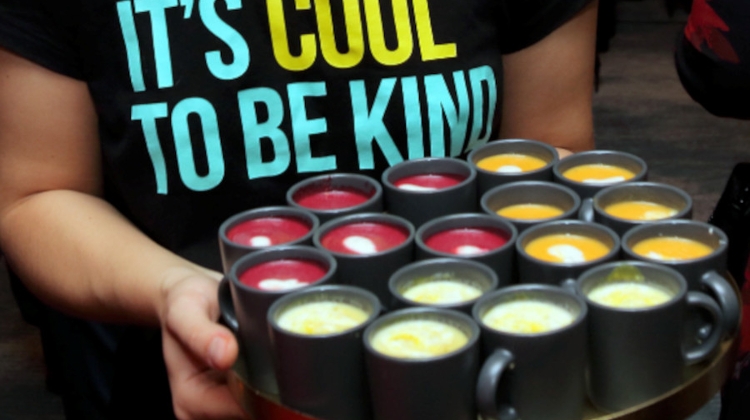 The international buffet included Lebanese cuisine fresh from the grill by ARZ Restaurant, Brazilian from Ipanema Grill at the Ritz-Carlton, French rillette with salmon by Hilton Budapest, Chinese from Wan Hao, British and Hungarian from Tesco, Indian from Mr Masala. 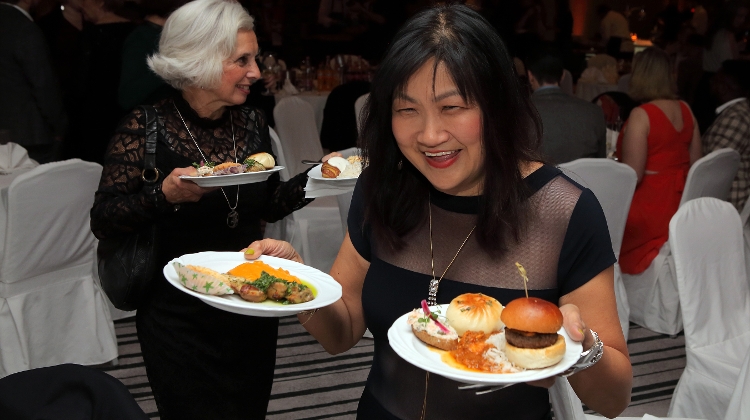 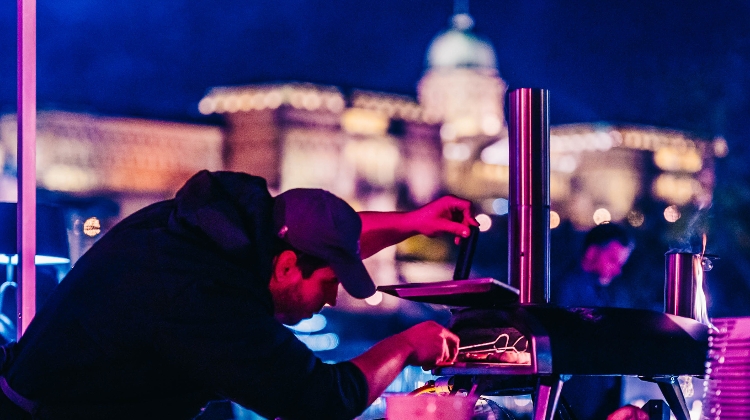 Plus there were savoury and sweet pastries by Fornetti and treats from Cream Donuts, as well as three big and super delicious birthday cakes freshly baked for the occasion by Cloud9. 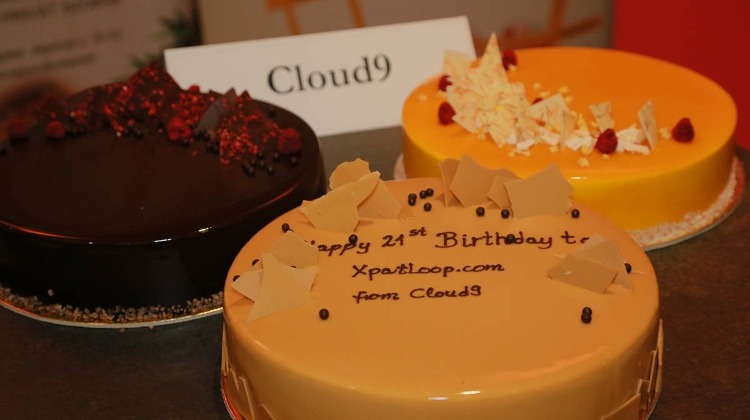 To ensure good cheer, a wide range of quality drinks were served all evening, including cocktails, beers, wines, and spirits from WhiskyNet.hu. Outstanding local craft beers were served by Hedon, and also by Timco Brewing who also brought some extra wine to the party. 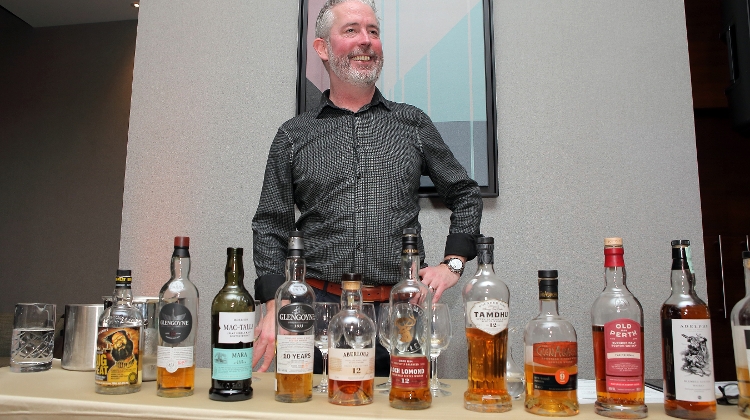 The fine wine sponsors, in no particular order, were Belward Winery from Baranya County, Figula from from Balaton Highlands, Grand Tokaj Zrt. from Tokaj-Hegyalja, Gilvesy Winery from Szent György-hegy near Balaton, Hilltop from Neszmély, Jammertal Wine Estate from Villány. 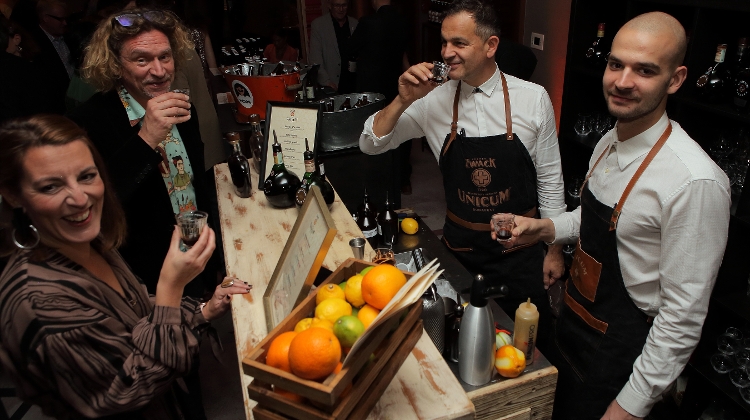 "We are always proud to contribute to the Xpat Bonfire Night Charity Party. A great event with great people," said Sándor Zwack, Chairman of the Board of Directors - who ensured that bottles of Unicum Barista and Unicum Riserva were on all tables booked by guesst.

Soft drinks fans were not left out given the range of Coca-Cola products on all tables, there was water by NaturAqua too, and many were also pleased to see Costa Coffee also available all night. 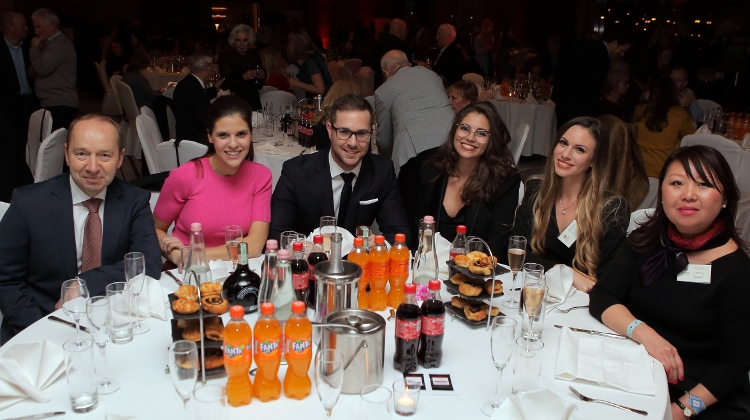 The live auction generated generous giving and much excitement as usual, this year one of the 'priceless' items up was from Aston Martin Budapest.

The winner will be collected by one of their luxury vehicles and taken for lunch at Matild Palace Luxury Collection Hotel, plus they got an Aston Martin F1 team cap signed by drivers Sebastian Vettel and Lance Stroll.

All the items included in the live auction (and silent auction) are listed in detail here. 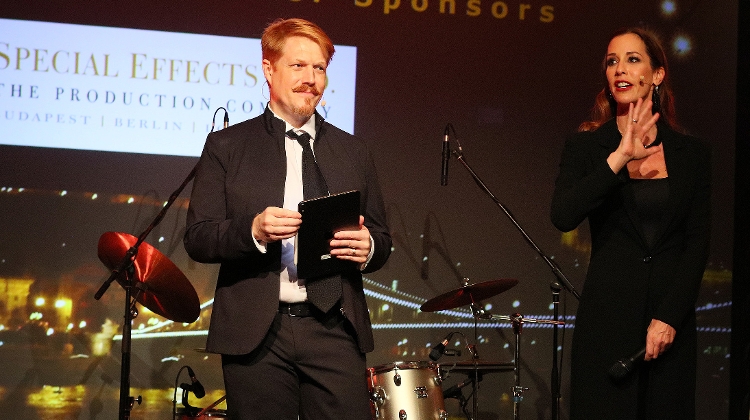 This fundraising highlight of the evening was led by local expat actor and voiceover artist Hans Peterson with TV personality Zsuzsa Demcsák, and they were on fire together this year.

This dynamic duo not only hosted the Live Auction, they guided proceedings perfectly all evening, including announcing the winners of the popular Silent Auction.

Competitive auction bidding broke out between guests, including the owner of Italian-Hungarian consulting firm ITL Group, Alessandro Farina (pictured below in centre), who said, “I had really good fun during the auction challenging one of the guests in a bidding contest, as fun and charity resulted in a vibrant mix throughout the evening!” 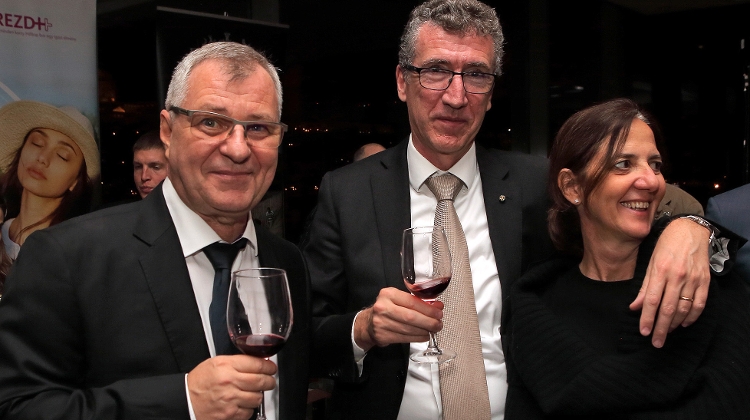 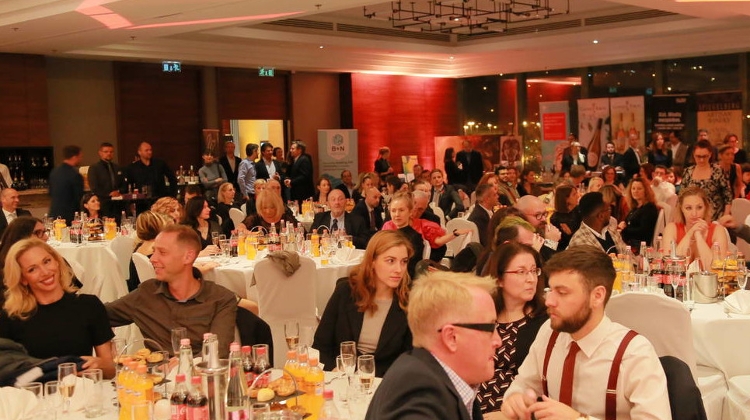 Tasting the tipples on offer whet the appetite of the audience at the live auction for mixing their own drinks. "I'm delighted my auction item of a classic cocktail masterclass did so well," noted the renowned Bar and Drink Consultant Dez O'Connell (pictured above serving single-malts).

"It was a great night, lots of good chat and deliciousness. Topped off by The Vibe (pictured below), the best cover band I've ever seen in Hungary. Thanks for getting me involved, looking forward to the next one", Dez said. 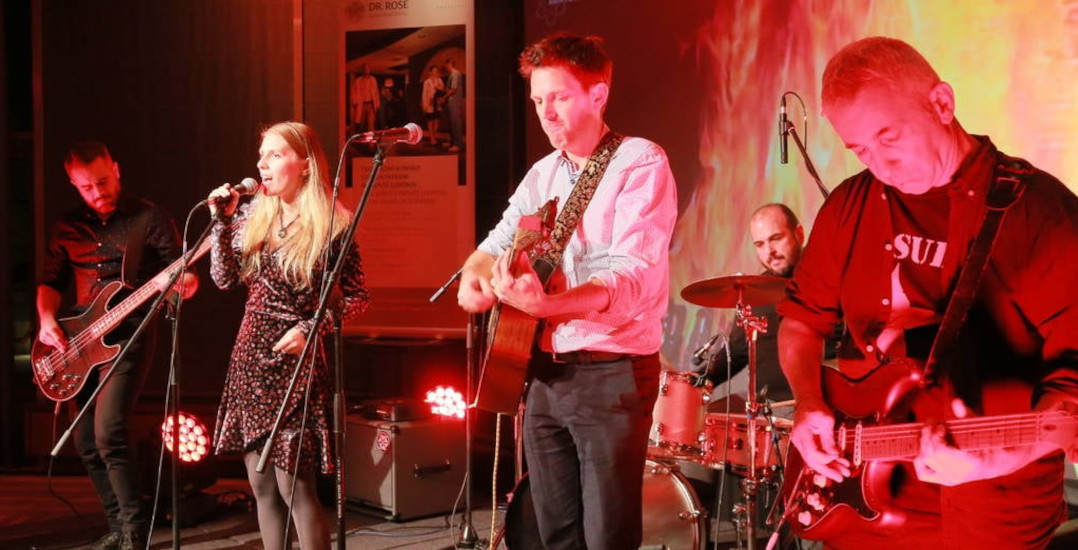 Other event entertainment included live pop and funky tunes in the welcome room by Fruzsina & Badman, and an enticing mix of eclectic grooves by DJ Mahogany from Brooklyn, NY.

Roulette & Blackjack for fun (not money) was provided by Las Vegas Casino, and there was a popular 'Wine Mafia Game' of blind tasting to win wines and more presented by Bortodoor City. 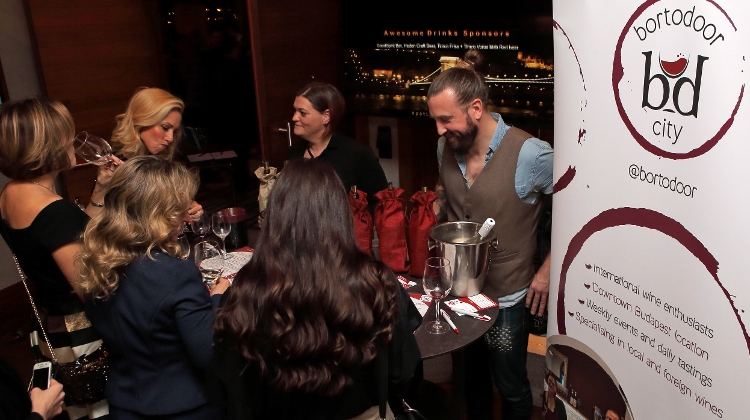 Also the Master of Ceremonies Hans Peterson made a theatrical performance wearing a Guy Fawkes mask, reciting part of a traditional Bonfire Night Verse set to a dramatic soundtrack.

In the spirit of unity which the event engenders, VIPs from other leading hotels in Budapest also contributed to the charity initiative and enjoying the evening, including a Director from Four Seasons Hotel Gresham Palace Budapest. 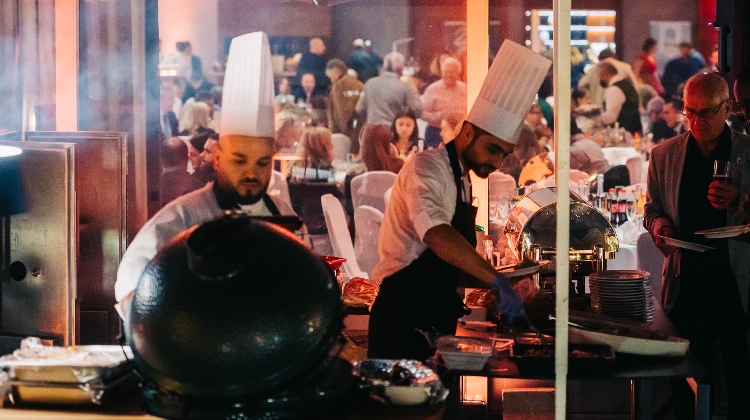 “This Bonfire Night event is always a great place to meet up with old, and meet new, friends,” said Peter Knoll (pictured below on right), General Manager of Hilton Budapest. 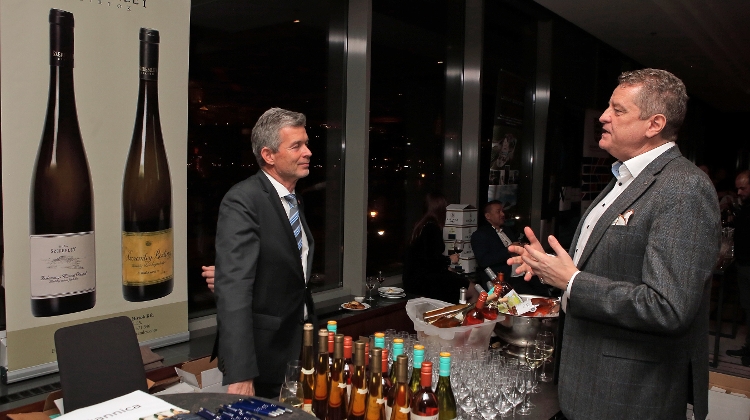 “We work with Csodalámpa so are aware of their kind activities. We were therefore very happy to support this event which contributed to funds towards this noble cause. We look forward to doing the same in years to come,” said Jonathan Pace, GM of Corinthia Budapest.

To sum up, Adam Goodman, Managing Partner of Mid Atlantic Films which services and produces major TV and theatrical films in Hungary, such as the recently release Dune, said,

"Big thanks to Stephen Linfitt and his team for putting together another successful and worthwhile charity event this year!" In his speech Stephen (pictured below on right) gave heartfelt thanks to all those involved, and he also helped present the free business card draw which topped off the event. 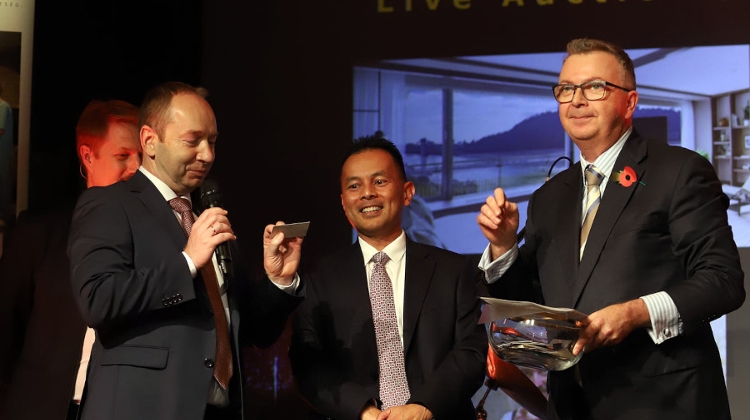 Many great prizes were won by guests left standing at the end of the night, including valuable gifts from Good Spirit Bar, Magnolia Day Spa, Mid Atlantic Films, Nova Apartments, Planet Sushi and Trattoria Toscana. To conclude there were top tunes by local DJ Tamás Máj. 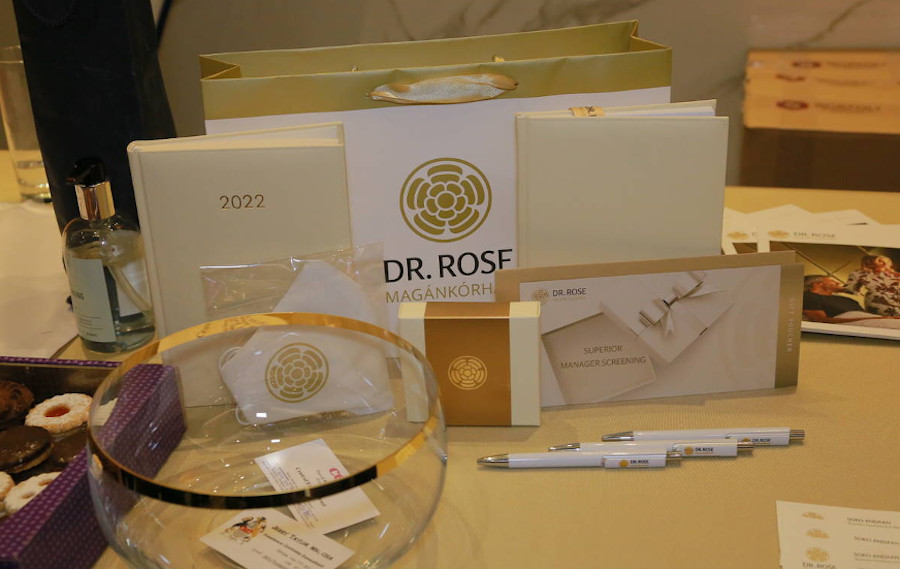 All guests departed with a lovely goodie bag from Dr. Rose Private Hospital, many took away a framed photo of them at the event by PartyBooth.hu, and to work off any extra calories gained at the party everyone got a pass worth HUF 20.000 for the Fitness & Health Club by Marriott. 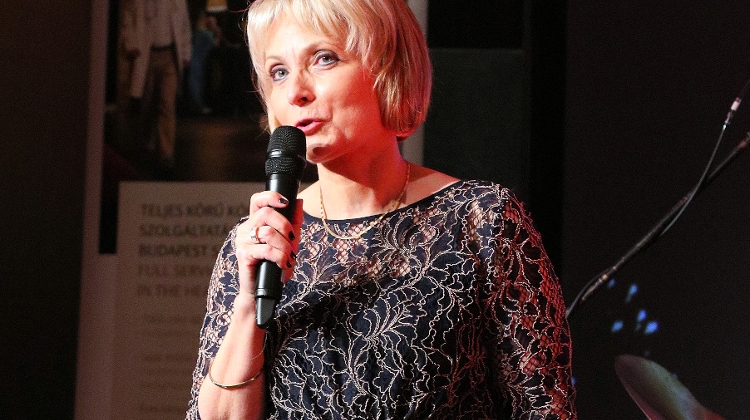 Afterwards the director of the Csodalámpa Foundation Éva Patzauer (pictured above) enthused, “Thank you for all of your work on the Xpat Charity Party event, which was a real success again!"

"A good number of children will be happy thanks to the outstanding support from you, all the guests and event sponsors and supporters. Please give our sincere gratitude to them all from the depth of our heart!” she concluded.