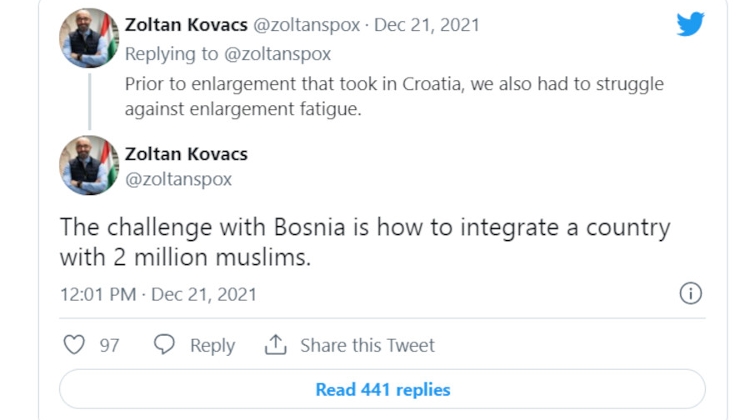 Bosnian officials and religious leaders have condemned the statements made by Prime Minister Viktor Orbán and Zoltán Kovács, State Secretary for International Communications (pictured, right), who claimed that integrating Bosnia-Herzegovina into the European Union would be a challenge because of its large Muslim population, reports Aljazeera.

Kovács wrote on Twitter on Tuesday that “The challenge with Bosnia is how to integrate a country with 2 million muslims.”

At the Government Information briefing on Tuesday, Viktor Orbán said that Hungary supported Bosnia’s bid to join the European Union, and that he would do everything he could to make stability in the Balkans a pan-European interest and persuade member states to further expand the EU.

As the Prime Minister stated,

I will do my utmost to convince Europe’s great leaders that the Balkans may be further away from them than Hungary, but a key issue from the standpoint of their security is how to deal with the security of a state where two million Muslims live.

Following this statement, reactions came from Bosnia the next day: some parties called for a ban on Orbán’s planned official visit to Sarajevo, and a leader of the local Islamic community called Orbán’s statement “xenophobic and racist,” adding:

If such ideologies become the basis of the policy of a united Europe, it will take us back to a time when European unity had to be built on similar fascist, Nazi, violent, and genocidal ideologies that led to the Holocaust and other heinous crimes.

It is not a challenge for the EU to integrate two million Muslims. Bosniaks in BiH [Bosnia and Herzegovina] are native European people who have always lived here. We are Europeans. - said Sefik Dzaferovic.