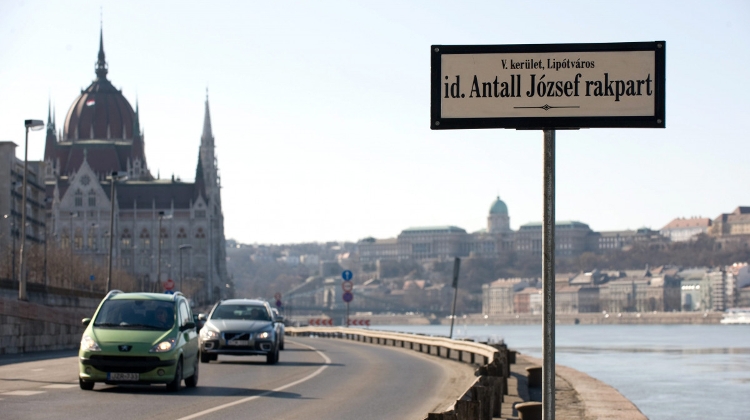 The Budapest municipal council will begin the upgrade of the Danube embankments by renovating the section of the Pest embankment between Kossuth Square and Margaret Bridge, Gergely Karácsony, the city’s mayor, said.

Because the original plans for the upgrade which were submitted early last year had reflected the ideas of the previous Budapest administration, the project has had to be redesigned, Karácsony said on Facebook.

The new plans include a wider sidewalk and a longer section of road with reduced traffic. The guardrail will be removed from the side of the road and trees will be planted in its place, Karácsony said.

A 4-5 metre wide pedestrian path will be installed and the speed limit on that section of the embankment will be reduced by 30 kph, the mayor said.

The design of the pedestrian path will fit the look of the embankment section in front of Parliament and 35 trees will be planted along the path.

To make room for the pedestrian path, the exit lane at Markó Street will also have to be modified in line with monument protection regulations, Karácsony said. Due to a lack of room for a bicycle path within the project, cyclists will have to continue using the upper embankment, he said.

The municipal council on Friday invited public procurement tenders for the project, Karácsony said, adding that construction was scheduled to begin in June and end on Dec. 31 this year.

Bidders for the project have until March 17 to submit their offers, the Budapest Mayor’s Office said in a statement.

Meanwhile, Balázs Fürjes, the state secretary in charge of development projects in and around Budapest, said the government is contributing 787 million forints (EUR 2.2m) to the project under a decision by the municipal public development council.

“Our goal is clear: renovating the embankment and building a pedestrian path on the bank of the banks of the Danube,” Fürjes said on Facebook.

“This means that this section would connect to the Jászai Mari Square section [of the embankment] from the north and to Kossuth Lajos Square in front of Parliament from the south.” Both sections had been built using government funding over the last ten years, he said, adding that the new project “shows that our commitment to keep developing Budapest hasn’t changed”.

The technical details of the project were finalised by the public development council last year, he said, adding that cooperation between City Hall and the Budapest Development Centre had been strong ever since.

Talks are still ongoing between the government and the municipal council on the financing of upgrade of the embankment section extending to Blaha Lujza Square, Fürjes said.