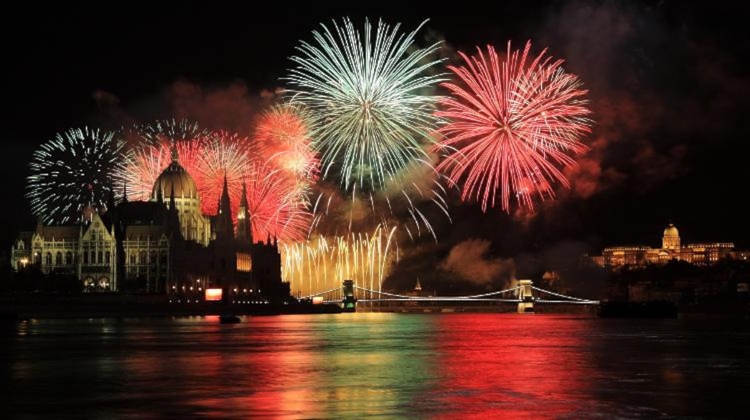 The August 20 celebrations will again span four days this year, with hundreds of programmes on offer to expats at some 20 venues from 18 August.

20 August Air Parade in Budapest Cancelled Due to Weather Forecast

The perative board will make a decision on the August 20 fireworks display scheduled for 9pm after its meeting at noon on Saturday, he said.

The Hungarian Air Force will perform fly-passes over the River Danube during this year’s August 20 celebrations, between 9 - 10 am.

The commander of the Hungarian Armed Forces said that the air show will feature every type of aircraft in the Air Force:

Including Gripen fighters, training and cargo aircraft, as well as Mi-24, Mi-17 and H145M helicopters. Plus the air force planes will be joined by civilian aircraft.

The organisers of the celebrations are expecting even more visitors than last year's almost two million, over the course of the festivities.

The twenty plus venues will offer hundreds of programmes, family and children's events, pop and classical concerts, as well as traditional Hungarian cuisine.

More than 12,000 people are involved in the preparation and organization of the four days of activities for St. Stephen's Day, which include traditional elements such as the “festival of new bread”.

Official state events also include the swearing-in of new military officers, the hoisting of the national flag and guided tours to see the Holy Crown in Parliament.

Visitors can view the Holy Crown, the Grand Stairway and the Dome Hall at the Hungarian Parliament Building free of charge on August 20th between 10:00-18:00.

Meanwhile, church celebrations will include the traditional festive holy mass and the August 20 procession of Saint Stephen’s Holy Right Hand.

On St Stephen’s day, Hungarians commemorate the foundation of the Christian Hungarian state over one thousand years ago. During his reign, Stephen the 1st declared 15th August the 'Day of Our Lady'.

It was on this day that he offered up Hungary to the Virgin Mary, and it was also on this day in 1038 that the king died. The date of the national celebration was moved to August 20 by King Ladislaus.

This is because on this day in 1083, with the blessing of Pope Gregory VII, the relics of Stephen the 1st – the Holy Crown and the Holy Right Hand – were raised to the altar in the Székesfehérvár Basilica, an act considered equivalent to canonisation.

The festivities this year will close out with the traditional evening fireworks display over the Danube, with some 40,000 fireworks set to go off at 9pm between Margaret Bridge and Petőfi Bridge - read more about the fireworks show below.

In addition to all the above and the many musical performances, the well-known Festival of Folk Arts will also be organised, along with the Fashion & Design Festival.

At that visitors have the opportunity to get to know a number of Hungarian designers, craftsmen, and gastro artisans. The artists will also sell their unique products, be it clothes, jewellery, accessories, home furnishings, photos or even culinary delicacies.

In addition to existing catering outlets, more than one hundred and fifty vendors will be selling affordable, capped-price products as introduced last year.

For example, outlets will be selling canned and draught beer for HUF 350, just like most soft drinks, while half-litre mineral water will cost HUF 190.

Those who love gastronomy will also be able to visit the Street of Hungarian Flavours and the Csárda Fesztivál, as well as the Food Truck Show.

Plus this year a spectacular festive procession entitled “Moon-Light-Tales” will also take place on Andrássy avenue.

The fireworks show is set to raise last year’s highly successful story-telling narrative to an even higher level.

The traditional fireworks show in Budapest on August 20 will cost a gross 1.65 billion forints (EUR 4.1m), the same amount as last year.

This time it will display a condensed chronicle of the thousand years from the birth of Christian Hungary to the present in a form that focuses on the lesson of the memory of national values and the passing on of St. Stephen's heritage for children, young people, and future generations.

The festive programme is a true family experience where parents can hold their children's hands and travel together with the tableau of the great periods and significant moments of Hungarian history, while emphasising the important national values that can also provide support for everyday life in the form of a moral lesson.

Once again, the show reminds us of the miracle that despite so many difficulties Hungary has managed to remain 'in the heart of Europe', and this is thanks to the solid values of the Hungarian nation and the strong roots of the Christian culture of Saint Stephen.

The fireworks display is set to be complemented by a spectacular drone show and a special light show “painted onto” the surfaces of the Parliament building, the National Gallery and Gellért Hill.

For more official info about all these celebrations see here

Cost Revealed of Fireworks in Budapest for August 20 Display