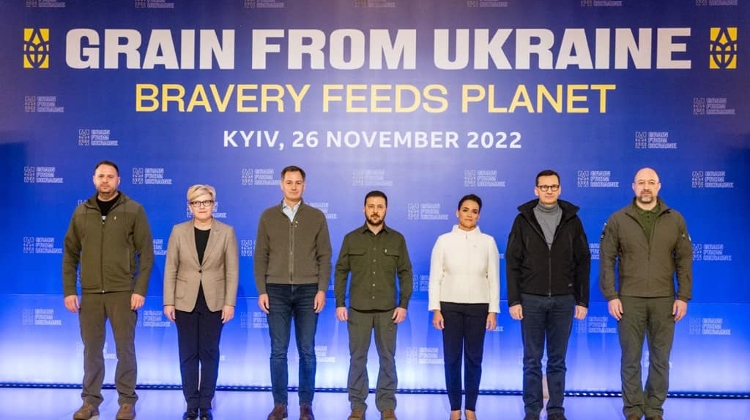 Left-wing and liberal sites believe that government supporters oppose the President’s friendly gesture to Ukraine, while a pro-government analyst writes that Ms Novák’s visit to Kyiv was consistent with the government’s stance in favour of a just peace for Hungary’s war-torn eastern neighbour.

Katalin Novák arrived in Kyiv on Saturday to support the ‘Grain from Ukraine’ initiative. She was invited, along with the Prime Ministers of Lithuania and Poland, by President Volodymyr Zelensky on the 90th anniversary of the Holodomor, the great Ukrainian famine of 1932/1933, to promote grain exports to countries in Asia and Africa that are the most vulnerable to famine and drought. Hungary is contributing to the programme, she said.

Hvg.hu quotes Facebook posts by Fidesz fans who criticise the President for meeting with her Ukrainian counterpart, whilst accusing Mr Zelensky of responsibility for anti-Hungarian measures taken by local authorities in sub-Carpathia which is home to over a hundred thousand ethnic Hungarians.

Referring to the sometimes rude comments in its headline, the website of the liberal weekly writes ‘The Fidesz horde rush at Katalin Novák’.

In a similar vein, Hirklikk refers to Számok, a practically unknown news site it describes as ‘Putinist and Orbánist’ which lambasts the President for meeting President Zelensky after having ‘given a five’ to the American ambassador and receiving the representatives of a gay and lesbian NGO.

Mandiner quotes a Facebook post by Ágoston Sámuel Mráz, a prominent pro-government analyst who dismisses the idea that President Novák expressed anything other than the well-known position of the government on the war in Ukraine.

She reiterated her condemnation of the Russian aggression and meanwhile expressed her wish for a peaceful and just settlement. There certainly are people in Hungary more favourable to Russia’s behaviour than the government or the President, Mráz writes, but their opini